Posted by Paula at 11:18 AM
Loooooong time, no blog.  But I love my new June cover so much I just had to share it! 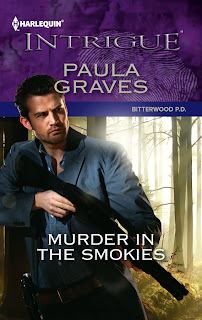 The hero, Sutton Calhoun, comes from the poor side of Bitterwood, Tennessee, a little town at the edge of the Smoky Mountains.  His daddy is a con man and Sutton left home as soon as he could to get away from his father's crimes and his family reputation.  But now he's back in Bitterwood to investigate a murder.  Which brings him back into the life of Bitterwood P.D. detective Ivy Hawkins, the loyal friend he left behind when he put his life in Bitterwood behind him.

For Ivy, Sutton's return is a bittersweet surprise, because he may have thought of her only as a friend, but she's loved him forever. And he's no more likely to stick around Bitterwood now than he was fifteen years ago when they were teenagers. But the mystery he's there to solve is connected to her own open case.  And spending time with Sutton again, after all these years feels so right.

Except working together on this mystery just might get them both killed....

Posted by Paula at 11:46 AM
Yes, I know it's been forever since I posted anything.  And I can't even promise that I'm going to do better in the future.  But since I'm here, how about a look at my new book covers?  The last three Cooper Security books for 2012 will be out in August, September and October, and here are their covers:

Shannon Cooper came to Nightshade Island to carry out a mission. But she can't do it without the mysterious Gideon Stone. The enigmatic, battle-hardened former soldier is much more than just the island's caretaker. And the powerful feelings he's awakening go deeper than fleeting desire.

Former special ops, Gideon has seen danger up close and personal. Now, protecting Shannon from deadly mercenaries is his first priority. But who will shield him from the onslaught of emotion the beautiful computer tech is arousing? As a storm hurtles up the Alabama Gulf Coast, mirroring the passion raging through his defenses, Gideon will do whatever it takes to survive…and explore a relationship as impossible as it is irresistible.…

Although a missing Annie Harlowe and her entire family were at the forefront of a Cooper Security investigation, Wade Cooper never expected to stumble upon the half-conscious beauty in his own backyard. Thankfully, Annie had somehow escaped her captors. Unfortunately, she had no memory of the past three weeks. Before long, the memories slowly began to return—and the threats to her life turned deadlier. And although her well-being was becoming more than just an assignment, Annie’s safety remained the battle-scarred marine’s top priority. Still, for a man who’d avoided the risks a relationship was bound to bring, could Wade really walk away once this case was closed? And what could his future possibly hold if he did?


Although he was trying to crack a global conspiracy,former soldier Jesse Cooper had an even more important mission: keep new hire and girl-next-door Evie Marsh safe. Shocked to learn Evie could be the key to bringing down this secret plot, the head of Cooper Security had to stifle his attraction to her. After all, the case was on the line—and so were their lives. But between dodging bullets and staying one step ahead of the enemy, temptation became impossible to resist. As a man made for danger, Jesse thought sweet Evie had no place in his world. Then, in the heat of the moment, she proved she'd always have his back—or die trying.…

I hope you'll give these books a try, and remember, if you haven't read the first three Cooper Security books yet, they're still available at most online book outlets.
4 comments

Cover for May book! 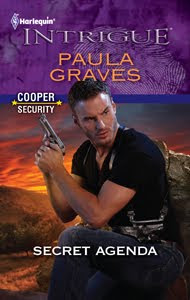 I've actually had this cover for a while, but I'm under a wicked deadline (and just got line edits for my August book, which will be due any time now). Anyway, here's the cover for SECRET AGENDA. I kind of hate that they didn't put the heroine on the cover, as she's a fiesty redhead with loads of attitude, and I'd have liked to see how they portrayed that.
Instead, we get sexy former Pentagon lawyer Evan Pike on the cover. Can't say I've got any complaints about that!

One thing I'm not that happy about, though is the back cover copy:
THE TRUTH WAS BOUND TO COME OUT, BUT HE HATED BEING THE ONE TO TELL HER...

He'd faced down danger multiple times, but now Pentagon liaison Evan Pike had to deal with the ultimate confrontation. Telling Megan Randall that her late husband had been murdered by his own government was difficult. Keeping their association strictly about business, however, was proving impossible. Especially once Megan's life was put in jeopardy.

On the run with a stranger, Megan wondered how her quiet life had changed so drastically. Having Evan as her protector was comforting and she knew he'd do anything to keep her alive. But he was also a man who had her questioning her belief that she'd never love again. And that was even more dangerous....
See, the problem with that blurb is that it makes Megan sound like some innocent flower of a widow whose life was quiet and event-free before Evan blew into her life, when in fact, Megan works as a security agency operative and is far more at home carrying a weapon than Evan the lawyer is. She's strong, feisty and utterly capable of taking care of herself, and for a fair amount of the book, she's keeping Evan out of trouble.
So I hope the blurb doesn't turn off readers looking for a kick-butt heroine.
2 comments

Posted by Paula at 9:00 AM
Just got the cover for my April book, Secret Hideout. I love the feel of the image—two lovers, isolated and in danger. Perfectly captures the tone of the book. I particularly love this book because it plays on one of my favorite themes—partners who become lovers. Hey, there's a reason I was a Mulder and Scully 'shipper, right? 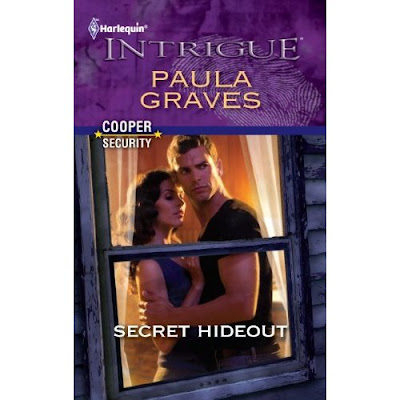 Pretty good representation of the hero and heroine as I imagined them, and the weathered cabin is also spot on.

I hope y'all love this book as much as I loved writing it.

Posted by Paula at 9:02 AM
Tried to embed this, but it didn't work. So here's the link:

Merry Christmas from the Family

But on a serious note, there's real meaning in Christmas for people like me, who are Christians. It's a beautiful story of love, forgiveness and redemption. So here's a classic video of the late, great Mahalia Jackson singing "Sweet Little Jesus Boy."

Have a wonderful, meaningful Christmas!
0 comments

Secret Identity - now with a cover!

Posted by Paula at 9:26 AM
I've been a bit out of pocket for the last three weeks, dealing with a bad case of cellulitis in my left leg. I'm still not back at my day job (though I'm working it from home), and I've been doing a lot of extracurricular napping to regain my energy. All that to say, I've been a complete slug at the whole blogging/social media thing.

But I do have something to share: the cover of my March 2012 book, Secret Identity! Wanna see it? 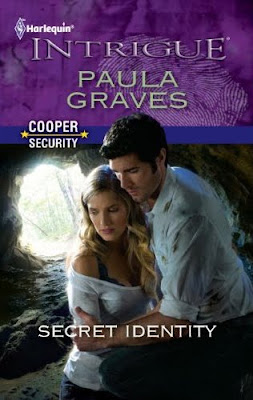 I'm pretty pleased with the cover. The hero and heroine look about how I pictured them, and the cave they're in is mostly right (though there's entirely too much light coming through the entrance).

I really love this heroine. She's tough, prickly, wounded and dangerous. I hope y'all love her, too.
2 comments

Much to be thankful for

Posted by Paula at 7:13 AM
In a bad economy, with wars still going on and much to worry about, I'm glad we have a day like Thanksgiving to remind us that we also have much to be thankful for.

I'm thankful to be alive, on this pretty November morning, with my family safe and sound and surrounding me with love and support.

I'm thankful to have not one job but two in this troubled economy, and an income that allows us to live in comfort and a certain level of security. I'm glad that I live in a country where I'm free to live life on the terms I choose and pray that it may ever be so.

I'm thankful for every single reader who bought one of my books this year, who bookmarked my website in their "favorites," who took the time to read one of my blog posts or to drop me a line on Facebook or retweet me on Twitter.

I'm thankful for my fellow writers who share so generously with their knowledge, their support, their passion and their endless supply of humor.

I'm thankful for the people who frequent the fandoms in which I dabble, whose intensity and passion for fictional things makes it possible for people like me (and actors, directors, musicians and other writers) to ply our trades in the first place.

I'm thankful most of all to the God who created us and the free will he gave us that challenges us, daily, to do the right thing out of choice rather than coersion.